We are all still working at Jim Gardner Construction.

We are lucky to still be continuing with ongoing projects in these difficult times. Fortunately, as we generally work in the unoccupied parts of homes and are able to keep up with social distancing requirements that makes it feasible. END_OF_DOCUMENT_TOKEN_TO_BE_REPLACED

Having completed our basement digout and needed drainage and foundation in Montclair to enable the new space we are continuing to work with our client through to the finished product. END_OF_DOCUMENT_TOKEN_TO_BE_REPLACED

Alameda Foundation Contractor On The Reality Behind Basement Renovations 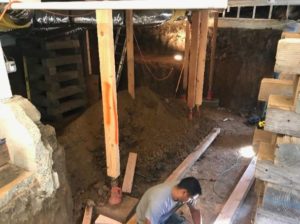 Basement Renovations can be great projects, adding substantial new living space to your home. They are, however, much more complex and expensive than most people realize. And this is why. END_OF_DOCUMENT_TOKEN_TO_BE_REPLACED

Read This Before Doing a Basement Digout

If there’s one thing I’ve learned in my nearly 40 years as a structural contractor, it’s that lack of preparation and research is the #1 reason homeowners end up getting burned on foundation projects like basement digouts. END_OF_DOCUMENT_TOKEN_TO_BE_REPLACED

Basement Home Additions – Can You Dig It?

Now that the real estate boom in the Bay Area has subsided, more people are focusing on making long-term repairs and improvements to their existing homes. When these projects involve the creation of more living space, the standard approach has been to build an addition. These are either second-story additions, additions behind the existing residence, or a combination of the two.

Another way to create new space which is becoming increasingly popular is to add space underneath your home, which for lack of a better term we will call the Basement Addition. This can involve the use of an existing basement, or the excavation of a portion or all of the crawlspace to create an entirely new area. There are advantages and disadvantages to either type of improvement.

Adding a second-story addition allows one to take advantage of natural light and visibility. Architecturally, these spaces can be very appealing. By going up, you are not removing yard space from Piedmont’s typically small lots. On the other hand, the increased visibility may be an issue for your neighbors. In a community where zoning regulations and neighbor input are looked at carefully, these projects can be difficult to get approved.

Second-story additions almost always require additional foundation and structural work to support the upper level, especially in older homes. The need for a stairway usually requires altering floor space at the lower level. And the rear addition requires using yard space which is not always available in smaller properties, due to limitations on the percentage of structure allowed on the lot or setback issues.

We Come From the Land Down Under

And I’m not talking about Australia! When exterior additions are not a feasible alternative, you can consider using the space under your home. The cost of such a project and the quality of the space developed depend on several factors. In general, the greater the slope your house is on and the more dirt you have to remove, the larger new foundation retaining walls become and the higher the cost. Taller foundations may limit the dimension of windows and will require more creative solutions to build a comfortable space while meeting habitability requirements.

Habitable space (aka living space) must fulfill certain building requirments and is significantly more valuable than non-habitable space (aka storage space) since it increases the total square footage of the living space in your home. In order for a basement addition to be considered living space it must be at least 7′-6′ in height, heated, properly insulated, with enough windows to meet glazing requirerments (around 10% of floor area).

Non-habitable space does not have the same monetary value, but it can be an important part of a basement project. Media rooms, mechanical rooms, wine cellars, laundry rooms, and bathrooms are spaces which do not necessarily require windows (or for which small windows are sufficient). They can be created in the portion of the addition which is mostly below grade (underground), reserving walls with larger window spaces for family rooms, bedrooms, home offices, recreation rooms, playrooms, and so on.

Absolutely not, if they are built or remodeled properly. With proper heat, insulation, light, ventilation, and appropriate finishes the basement addition should be similiar to the rest of the living space. Concrete retaining walls tend to make basements quiet, cool, and pleasant during warm weather.

The key to basement projects is the integration of structural and mechanical elements with the remodeling of the new space. Most basement additions require the removal and replacement of older foundations and the installation of a modern drainage system as part of the work. Since most of the house is affected by the structures underneath it, there is more going on in a basement addition than in a traditional remodel. The plumbing, heating, and electrical systems for the house may have to be modified or relocated. Since existing basements are not designed as finished spaces, their framing is often irregular and needs to be modified. Properly addressing all of these elements is crucial in planning this type of work.

At a time when habitable space in Piedmont is valued at approximately $600 per square foot, it is easy to see how a large basement addition can add value to your home. Basement additions will generally address existing structural problems as a part of the work. A full discussion at the beginning of such a project of the issues and alternatives outlined above will lead to the best design decisions and allow the homeowner to compare the cost and benefits of the work as part of that process.

Jim Gardner is a Piedmont resident and contractor whose company, Jim Gardner Construction Inc., specializes in basement additions and structural repair. He can be reached at (510) 655-3409.