We are out every day providing recommendations and estimates to homeowners in Berkeley, Piedmont, Orinda, and throughout the East Bay Area. Below we share some of our recent projects including an Oakland foundation repair proposal, a proposal for a driveway bridge replacement and an Oakland Hills retaining wall and drainage project in progress. 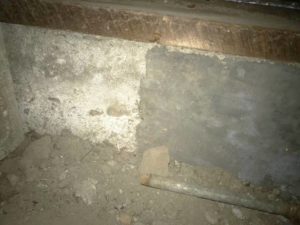 Unfortunately we see this way too often.

The client wanted us to look at his new house, hoping it needed minor foundation repairs.
It turns out the prior owners coated the old foundation with a thin layer of cement to either protect it, or more likely to cover up the fact that the concrete was failing (the right part is coated, and the left side is original).

The whole foundation needs to be replaced, despite the fact that most of it looks OK on the surface- underneath the concrete is badly cracked, unreinforced and crumbling in a number or areas. 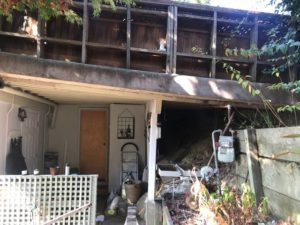 This is what is know as a Driveway Bridge- its a driveway spanning between the street and the house. This type of structure is extremely common in the Oakland hills.
Unfortunately, most of them are woefully under built (you can see the lightweight, leaning supports under the center of the span).

The building departments require them to be reconstructed to handle the weight of firetrucks after the Oakland Hills fire disaster, which requires substantial engineering.

Typically the foundations are being upgraded with piers, and structural framing is used, along with upgraded waterproofing above and a heavily reinforced concrete slab over plywood. The railing systems need to be engineered as well to withstand lateral forces of around 150 pounds. 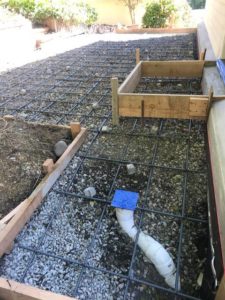 Adjacent to the house we had to build a 9’ tall retaining wall (underground) with drainage to protect the full basement down below. We were originally only going to do drainage and a patio, but found only a 12” tall foundation with no retaining wall underneath it.

Now that the drainage and retaining wall are completed next to the house, we have installed base rock and rebar for the front patio and landing. We will slope the new patio to the drain in the front corner, which will tie into our downspout drainage system going to the rear yard.