As a drainage repair and foundation specialist serving Albany, Berkeley, Piedmont, Oakland and the East Bay Hills we are out every day assessing structural issues with homes. Here we share some notes from recent estimates for a Berkeley foundation problem and needed drainage repair in Albany due to a poorly planned basement dig-out addition.

A substantial percentage of my calls are from people who are experiencing cracks in the interior of their homes.

The cracks are just a symptom of foundation, drainage and seismic issues. The cracks in the basement walls are likely a function of drainage related settlement and also possibly recent seismic activity. They are increasing in size because there is no rebar in the concrete holding it together, so once it cracks walls can shift and move more easily. Note the white efflorescence at the bottom of the walls that indicates there is moisture behind them.

Basements in older homes are often smaller spaces that were dug out of crawlspaces to create spaces for furnaces and water heaters. Note that on the red wall the foundation juts out on the bottom from the small upper foundation. The lower wall was added to create the basement space when it was dug out, but these are often added as vertical wall elements without proper footings that would allow them to function as retaining walls for the soil behind them, and they were added without drainage, both of which will make them more likely to settle and move, ultimately reflecting in issues in the house above. 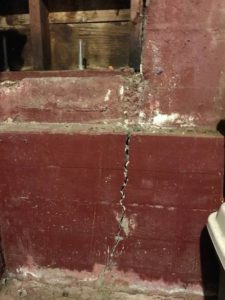 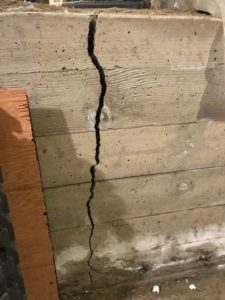 The worst type of drainage problems occur when finished basements are created without proper ( or sometimes without any) drainage, and then they develop water problems.

This basement was dug out several years ago, and a real nice remodel was done. Then they noticed a few years later that the floors were starting to rot. The Contractor who did the work tried to fix this by installing a lightweight drainage repair in front of the house, but it actually made things worse.

The picture showing the chimney is the same wall in the other photo located behind the bed. Proper drainage would need to go about 8’ deep on the outside of the building, below the basement floor grade, and then wrap around the house. This is the only way to confidently avoid drainage problems over time.

The last thing people want to do is to install expensive drainage when they are already spending a bunch of money on remodeling. But they need to understand that their problems can ultimately get a lot more expensive and problematic. Now the basement floors will need to get torn up, and possibly there are issues in the walls. And the client has developed some medical issues that may be related to exposure to mold over time. This fix is going to be a lot more expensive and time-consuming than doing things right from the beginning. 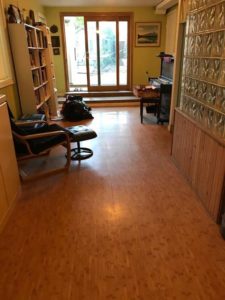 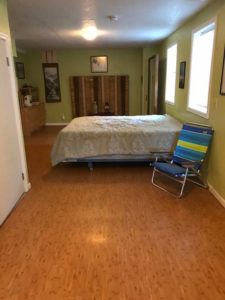 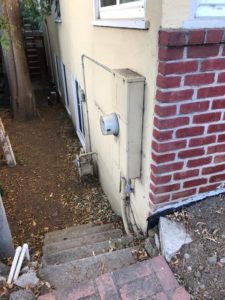 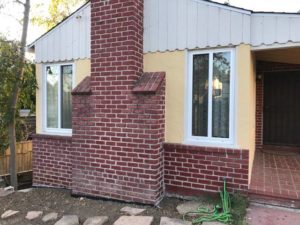