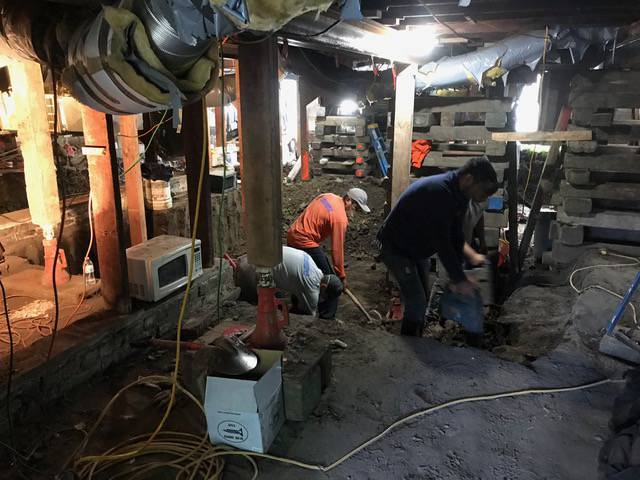 We are all still working at Jim Gardner Construction.

We are lucky to still be continuing with ongoing projects in these difficult times. Fortunately, as we generally work in the unoccupied parts of homes and are able to keep up with social distancing requirements that makes it feasible. END_OF_DOCUMENT_TOKEN_TO_BE_REPLACED

As is often the case with structural repairs, the requirements to bring garage projects in line with modern engineering standards can be substantial compared to the way they were built back in the day (generally in the 1920’s). Lack of properly reinforced foundations (aka retaining walls) and drainage are the primary culprits in the failure of older garages. There are often a number of challenges involved with their reconstruction which I will outline here. END_OF_DOCUMENT_TOKEN_TO_BE_REPLACED

We are out every day providing recommendations and estimates to homeowners in Berkeley, Piedmont, Orinda, and throughout the East Bay Area. Below we share some of our recent projects including an Oakland foundation repair proposal, a proposal for a driveway bridge replacement and an Oakland Hills retaining wall and drainage project in progress. END_OF_DOCUMENT_TOKEN_TO_BE_REPLACED

The homeowner contacted me regarding cracks they saw adjacent to their front entry stairs.

From my perspective, this is a sign of potential need for structural repairs or drainage problems that commonly affect these structures. Settlement cracks indicate there is movement below, which has different potential causes.

END_OF_DOCUMENT_TOKEN_TO_BE_REPLACED

I hear it over and over from customers: someone hires the cheap guy they found on Craigslist to do their structural repair or drainage projects and end up paying way more down the road to fix issues that weren’t done right the first time.  END_OF_DOCUMENT_TOKEN_TO_BE_REPLACED

Every day when I’m out doing estimates I am shocked at the number of projects that are failing because minor structural issues were not done correctly the first time around. END_OF_DOCUMENT_TOKEN_TO_BE_REPLACED

How to Find the Right Structural Repair Contractor for Your Project

Most people who I do estimates for me tell me the same story.  They have talked to a bunch of Contractors about their structural repair project and they all have different ideas about how to do the work …. and their pricing is all over the board.   END_OF_DOCUMENT_TOKEN_TO_BE_REPLACED

June 10, 2012 / By Jim Gardner Construction / Before and After • Stairs and Porches • Structural Repair/ 1 Comment

We were recently doing some minor repairs to a set of front concrete stairs when they suddenly and inexplicably collapsed into a pile of rubble in front of the home. After overcoming my initial dismay, I began to consider what might have caused this dramatic event. If this were to have happened when the homeowner was entering the house they could have been seriously injured. From above and below the stairs appeared to be in reasonable condition.

On closer inspection it was clear the concrete steps had been patched in the past, allowing water to get into the support framing. The only waterproofing under the old concrete protecting the framing was building paper (tar paper), which has a limited lifespan when it is in frequent contact with moisture. Since the old concrete had no steel reinforcing (rebar), once it settled due to the poor support framing it actually broke up into several smaller pieces. The wood form material underneath the stairs concealed this cracking. Because of a lack of proper flashing where the steps met the stucco sidewalls, water got into the walls and rotted the studs. This framing made up the structure supporting the steps, but it was also concealed by the stucco. All it took was the removal of one 2×4 and the whole thing came crashing down. If you figure at least a couple of cubic yards of material you are looking at approximately 10,000 pounds of concrete!!!! Front stair and landing replacements are becoming a significant part of our work, and with good reason. This dramatic collapse shows what can happen when the damage is severe, and why it might go unnoticed. With older concrete structures that show signs distress one should make test openings in the stucco and the support framing to look closely at their condition. If they are in poor shape it might make sense to consider replacing the whole structure. Sometimes new foundation work is required, but not necessarily. We would demo the existing concrete steps and support framing and replace the wood with new pressure-treated material, usually of a bigger dimension and with narrower spacing. This usually requires some detailing from our structural engineer to design the supports to modern engineering standards. On top of the framing we use pressure-treated plywood and then a bituthene roofing membrane for waterproofing, along with metal flashing at the sides adjacent to the wall framing. The final step is the steel-reinforcing for the new concrete. The end product is a much more supportive structure which will provide a safe entrance to your home for many more years to come.