As a contractor that specializes in foundation repair and other structural work, many of the older homes in our service area (Oakland, Berkeley, Piedmont, and Alameda CA) have foundations that are in really rough shape.

Sometimes we see concrete in the foundation that’s so bad, it’s more like dirt (it actually crumbles in your hand). This is due to water breaking it down over the years (because of inadequate or non-existent drainage systems).

In addition, many foundation repairs we do lack steel-reinforcement and have very shallow footings, which can cause them to crack and rotate.

However, by hiring a contractor to do the job right the first time and installing a modern steel-reinforced foundation of adequate dimensions and with proper drainage, your house can become properly supported for the next 100 years or more.

Read on to find out the types of foundation services we offer for residential customers in Oakland, Berkeley, Piedmont, and Alameda …

Older foundations often require repair or replacement. They typically lack rebar, and may be cracked or settled. Their dimensions are smaller, and they are often not deep enough into the adjacent soil to be stable. Due to drainage issues and moisture in the soil, the concrete has deteriorates and crumbles. Replacement with more modern reinforced concrete of appropriate dimensions is required. Sometimes portions of the foundation are in better condition than others, or have already been upgraded, in which case a partial replacement is possible.

Conventional T-shaped foundations are often not sufficient to support homes in hillside conditions. If there is settlement but t

he current foundation is more modern and in decent condition, we can sometimes do a pier and grade beam repair. This consists of installing a new reinforced concrete beam next to the current foundation and attached with rebar that is epoxied to it, and then supporting the modified structure with drilled concrete piers, consisting of deep holes often 10’-20’ deep filled with concrete and steel. This serves to hold up the modified foundation with supports in deeper, more stable soils.

The idea with foundation underpinning is to dig under the new foundation with deeper reinforced concrete footings tied into the existing concrete to stabilize the current foundation with a support structure in deeper, more stable soils.

Walls can be stabilized with pier and grade beam supports or foundation underpinning.

Often the interior walls in the crawlspace or basement are supported with isolated piers, which have posts sitting on them supporting a beam which holds up the floors above. In older homes these piers are oftentimes in poor condition and substantially undersized. We typically replace them with new piers of 24” square or larger dimensions, with steel reinforcement and post base hardware and post caps to provide better connections between the piers and the support beam above.

Older brick foundations can have many issues. They're often held together with mortar in poor condition, have minimal footings, are lacking reinforcement, and are highly vulnerable in the event of an earthquake and generally warrant replacement with more modern reinforced concrete foundations.

Minor and limited foundation cracks (3/8” or smaller) can often be patched with epoxy. Larger cracks can be mended with steel plates stitched to both sides of the crack, though we would only recommend this for a few isolated cracks. If the cracks are numerous, foundation replacement is often the better long-term solution.

Slabs can settle due to unstable soils caused by ground movement, which is often related to drainage issues. Badly cracked slabs need to be replaced, with the underlying soils filled and compacted, new reinforced concrete slabs installed, and the cause of the movement (either drainage or structural problems) also needing to be addressed.

Scroll through the images below for a closer look at some of our foundation projects. 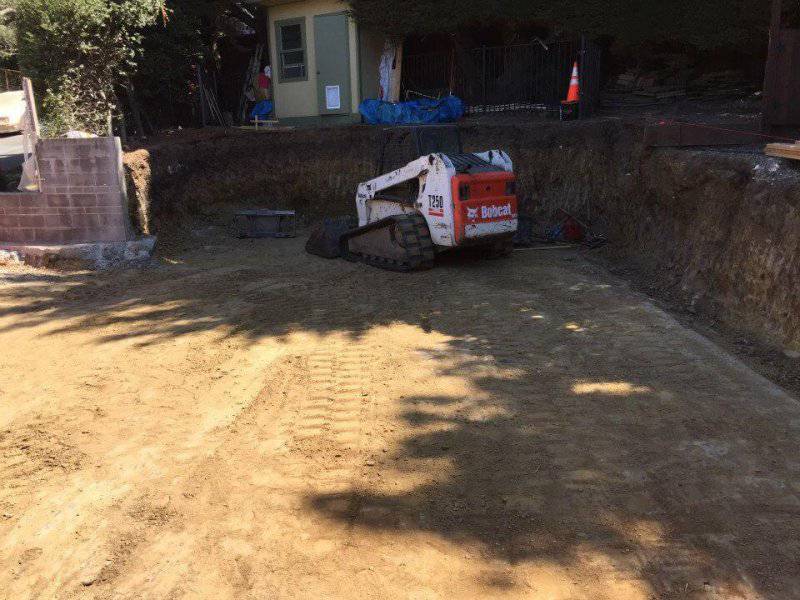 We demolished an existing garage and did all the concrete work and drainage for a new garage with a studio space and a bathroom for this project. Here, you can see the structure and foundations have been removed, and we are almost finished with the grading and excavation for the increased building footprint.

It's Fast and Free.